THE RESIDENCY HITS LONDON...AND IT'S A LAUGH!

As if THE RESIDENCY HALLOWEEN SPECIAL in Egham this Friday wasn't enough, we can now proudly announce our latest series of events taking place in London from next week... 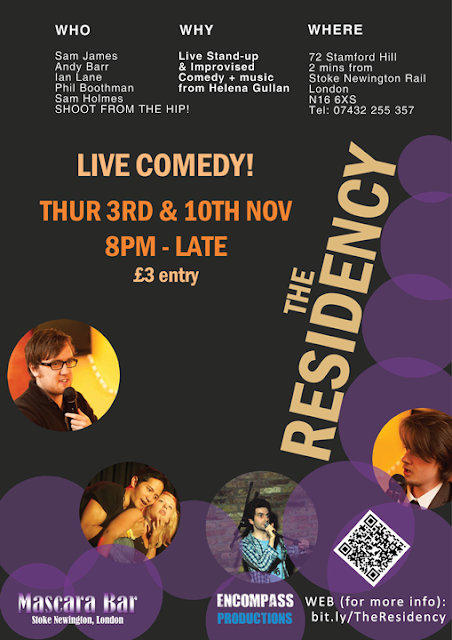 After a fantastic year of THE RESIDENCY in Egham, we’re starting to branch out further afield! On both Thursday 3rd and 10th November MASCARA BAR in Stoke Newington hosts not only our very first London events but our first COMEDY NIGHTS!

Featuring some side-splitting stand-up from:

We'll also be having the musical stylings of Helena Gullan to soothe you as you get your half-time beverages!

So for some guaranteed giggles and hysterical hoots come on down to The Residency: Comedy Nights at the Mascara Bar, London!

THE RESIDENCY HALLOWEEN SPECIAL - THIS FRIDAY! 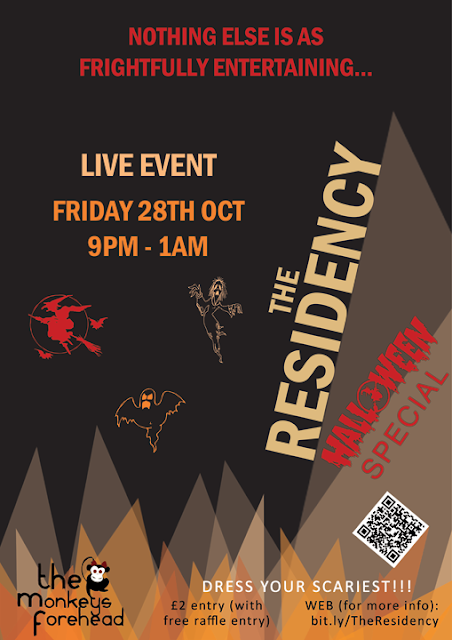 Just because we've just announced our new comedy nights in London doesn't mean we've forgotten about our live music Residency at THE MONKEYS FOREHEAD in Surrey! The latest acts announced are Helena Gullan, who will be amazing us with her electronic violin  and Vivienne Youel who will be playing more of her first-class original tunes. We also have:

We'll be having our usual Residency Raffle with great Halloween-themed prizes, and courtesy of the wonderful people at The Monkeys Forehead we've got some exclusive drinks deals including 2 for 1 on Cocktail Jugs - only £12! There will also be a special themed cocktail and even The Residency theme music will have its own scary twist...look out for them!

THE RESIDENCY HALLOWEEN SPECIAL
Nothing else is as frighteningly entertaining - dress your scariest!

WANT TO PERFORM AT A FUTURE RESIDENCY EVENT? EMAIL US!

That's all the latest news for now, but look for another event announcement (or two!) soon and the reveal of our next artistic project!


We hope to see you at one of our events in the coming weeks!