Hello folks, producer Jonathan here and we're back with another Stormin' Norman update!

So whilst Encompass has been busy with our new Bare Essentials event and pre-production for new play Who is Moloch? the Stormin' Norman team have been entering the final stages of post-production for this first Encompass project on film. 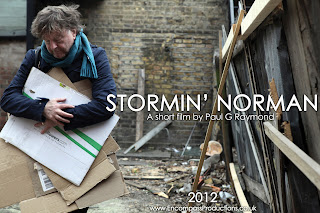 It's been a long time coming but we finally have a cut that we're happy with. Editing a film can be a laborious process, especially when the film in question is a short one and you have less time to play with! Simon (editor) has worked hard to fine-tune the film and has done a brilliant job responding to director and producer feedback - even when said feedback has been nitpicking! Perhaps no-one has been more brutal with his own work than writer and director Paul however - cutting unnecessary scenes and dialogue as he sees fit without any hesitation. It takes a certain artistic tenacity to be able to do this, a quality in Paul which I've had the pleasure of witnessing throughout this production.

Pan has been readying the sound, and it'll be interesting to see what he does with the urban soundscape of East London. I think after the brilliant London 2012 we all know how vibrant the city can sound! Whilst dialogue is a key component of this short (and just how much may surprise people) it'll certainly be interesting to hear how Norman's environment changes throughout his day and in the various locations.

Another part of post-production nearing completion is the score. Frequent Encompass collaborator Alex Burnett has finalised the music for the film and is recording the live elements this week. Here's what he has had via his new Facebook page:

"Creating a soundscape first can often lead to finding the right melodic material. The current film I'm scoring, 'Stormin' Norman', proved this yet again as I produced the ambient texture of the city before discovering the first melody of the soundtrack. For the final track what I wanted to achieve is a piece that not only brings the score and film to an exciting and emotional conclusion but also be a track that people can and want to listen to."

Alex's last project for Encompass - the acclaimed soundtrack for What It Feels Like - was produced electronically but this time he wanted to have live instruments present throughout the score, a decision both Paul and myself were fully behind. Alex is in the studio this week recording violin and guitars with EP associate performers Helena Gullan and Luke Manning respectively - Luke also appears in Stormin' Norman as 'Barry'. I'll also be dusting off my drumsticks to play drums and percussion - the rhythm is the real backbone of the score and I'm honoured Alex asked me to play for it! Paul, Alex and I felt that the blend of electronic and live elements would further extend the sonic scope of this ambitious soundtrack - it really is quite unlike anything we have heard for a short and having seen it in the context of the film we can safely say you're in for a treat! You can listen to a preview of the soundtrack below:


The exciting part of any project is seeing everything come together. Stormin' Norman is nearly complete! As we want it to have a presence on the festival circuit first we won't be releasing it online for a good while - however we will be organising screenings which you'll be able to come to! Keep an eye out...


VISIT THE STORMIN' NORMAN BLOG
Posted by Unknown at 14:04