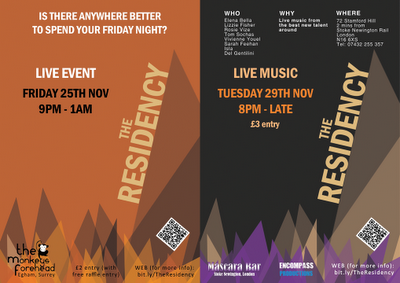 We've already had The Residency: Live Comedy Nights at Mascara Bar, London bringing the funny twice this month and now...THE RESIDENCY HITS THE END OF NOVEMBER IN A BIG WAY WITH TWO MORE EVENTS!

THE MONKEYS FOREHEAD - EGHAM, SURREY
After our Halloween Special last month we're returning to the Monkeys Forehead with another brilliant evening of live music, prizes and fantastic drinks deals. It'll be our last Egham Residency of the year and will feature some great live acts including:

Is there anywhere better to spend your Friday night? We think not - so come along!

THE MASCARA BAR, STOKE NEWINGTON, LONDON
We're proud to announce our first London-based music Residency with a return to the Mascara Bar, London! Get ready for a night of astonishing new musical talent featuring both Residency favourites and acts making their Residency debut including:

What a night! Bring yourself, your friends, your family, your loved ones, the bloke off the street...this music needs to be heard and we want you all there in support of it!

ENCOMPASS TO GIVE TALK AT GOLDSMITHS UNIVERSITY
Encompass Productions will be giving a talk at Goldsmiths, University of London on November 30th. Jonathan Woodhouse (Founder & Artistic Director of Encompass) will be giving an insight into the process of forming a new company - the trials, the tribulations, the highs and the lows, and will also be answering questions from students.

"I'm very honoured to be a guest at the UK's leading creative university. Encompass is only nineteen months old and despite its success so far we are very much a company still in its infancy - however I believe Goldsmiths has the right idea in asking a new company to talk about their experience so far. It keeps things relevant, allowing us to more closely reflect on our process and the challenges of being a new company existing in the current arts climate. It means we can be realistic and optimistic at the same time. We hope the talk will be both informative and inspiring."

Joining Jonathan from Encompass will be Christopher O'Shaughnessy, Researcher and Dramaturge for the company. A portion of the talk will also be dedicated to a Q&A on 'The Lady', the upcoming motion picture from legendary filmmaker Luc Besson. The film chronicles the life of Burmese democracy leader Aung San Suu Kyi (Michelle Yeoh) and her husband Dr. Michael Aris (David Thewlis), with Jonathan starring opposite the pair as their eldest son 'Alexander Aris'. More information, images and trailers from the movie can be found at http://www.useyourfreedom.com/.

NEW VIDEO SKETCH FROM SHOOT FROM THE HIP! 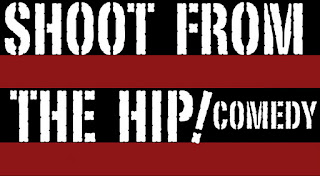 Our resident funny people loved performing at the first two comedy Residency events this month...but they've also been hard at work at writing and filming some new sketches! Check out what life is like with the Pumpkin Queen at the link below - let us know what you think!


We've got more hilarious sketches for you coming soon, as well as an improv show at The Brownswood on Monday 5th December! More details soon!

OUR NEXT ARTISTIC PROJECT!
In case you've missed it, we recently announced our next artistic endeavour. Stormin’ Norman is a short film written and directed by Paul G Raymond, produced and created by Encompass Productions.

Stormin’ Norman follows Norman, a homeless man living in the London suburbs. We journey with Norman through the ups and downs of his everyday life until he meets Sarah, a young woman who dares to break the routine.

The company are incredibly excited about this brave new adventure, which is expected to start shooting in Winter 2012. The piece is currently in research and development and the cast will be announced in December. We'll have vacancies for film crew positions available with more information soon. Interested? Email us!

About the writer/director
Paul G Raymond serves as the media coordinator of Encompass and was most recently seen playing the part of 'Lester' in our hit production 'What It Feels Like'. He is also a performer in our improvised comedy troupe SHOOT FROM THE HIP! - you can find out more information about Paul here.

WEBSITE UPDATES
-A brand new 'videos' page for SHOOT FROM THE HIP! where you'll be able to watch all their brilliant comic sketches!

We hope to see you at one of our many upcoming events and shows!
Encompass