3 weeks of SHOOT FROM THE HIP! starting tonight! 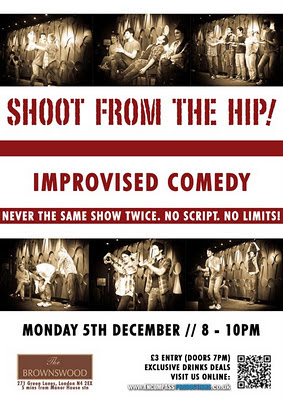 SHOOT FROM THE HIP! are hitting London (repeatedly!) in December with their rip-roaring improv comedy show!

Following their fantastic appearances at The Residency live comedy events in November everyone's favourite new comedy troupe are back with their own brand of off-the-cuff hilarity, starting TONIGHT with their show at The Brownswood.

Never the same show twice, SHOOT FROM THE HIP! will rely on audiences to suggest characters and locations - and with no script, there are of course no limits!

So bring anyone and everyone with you for a guaranteed cracking night. The Brownswood will also have some great drinks deals on - all this for a measly £3...what more could you ask for? Be there!


Of course one show isn't enough, so how about two more? We're very proud to announce that SHOOT FROM THE HIP! we'll be appearing every Tuesday from 13th December at the renowned Top Secret Comedy Club in Covent Garden! Our comedians will then be improvising their socks off at The Residency Comedy Night: Christmas Special on 19th December back at the Brownswood. The event will be raising funds for homeless charity Crisis.