SHOOT FROM THE HIP! HIT THE WEST END // THE RESIDENCY CHRISTMAS CRACKER - FOR CHARITY! // OPPORTUNITIES TO JOIN ENCOMPASS // LATEST NEWS

We've some very special announcements for you as 2011 draws to a close... 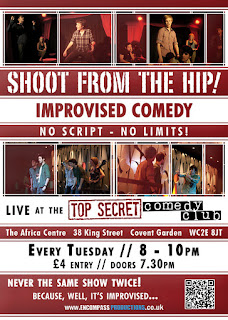 SHOOT FROM THE HIP! are hitting London with their own brand of off-the-cuff comedy now EVERY WEEK!

Following their fantastic appearances all over London (and even winning an Improvaganza event at the Edinburgh Fringe) everyone's favourite new comedy troupe are coming to the renowned Top Secret Comedy Club every Tuesday!

Never the same show twice, everything SHOOT FROM THE HIP! perform on stage is completely unrehearsed and unpredictable. You give the locations, you give the characters...and remember with no script there are no limits!

So bring anyone and everyone with you for a night of improvised chuckles right in the heart of London's West End at Top Secret! 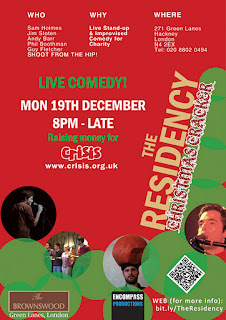 After our two comedy Residencies last month we're making our way to The Brownswood for another fantastic evening of live comedy, this time raising money for the 'Crisis' charity! It'll be our last Residency event of the year and will feature some great live comedians including:

All profits will go to 'Crisis at Christmas' which provides vital services for homeless people over the festive season and is celebrating its 40th anniversary this year. So come and join us for one last time this year for a cracking night to celebrate all things Christmas...and all things comedy!

Encompass gave a successful talk at Goldsmiths, University of London last week on 'forming a company'. The talk was led by Artistic Director Jonathan Woodhouse and Research and Dramaturge Christopher O'Shaughnessy.

"The aim was to give an optimistic but realistic idea of what it takes to form an arts company, and how to keep it going. We charted our journey so far, the ups, the downs and also talked about our process. It was a great turnout and it was fantastic to hear everyone's questions. To be told by people afterwards that they were inspired was very humbling and it means we achieved our goal."
Jonathan Woodhouse, Artistic Director

We will soon be announcing opportunities to join Encompass for our upcoming productions! We are looking for both performers and crew members to join the teams for our short film 'Stormin' Norman' and our yet-to-be-announced next theatre project! If you're interested in finding out more details, send us an email to enquiries@encompassproductions.co.uk!

We hope you're able to join us at our last events of 2011 - expect more updates soon!