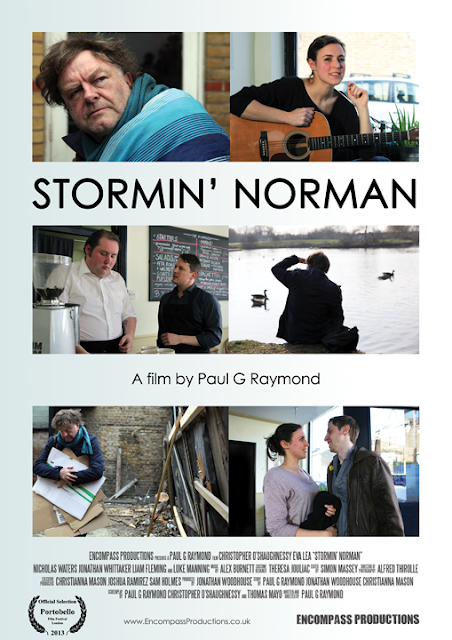 Big news for Stormin' Norman as Encompass' film debut has been selected for the 2013 Portobello Film Festival in London! The film was written and directed by Paul G Raymond and is scheduled to be shown on Sunday 8th September at 'Having a Laugh' which screens the latest and greatest comedy films.

Stormin’ Norman follows Norman (Christopher O'Shaughnessy), a homeless man living in London. We journey with Norman through the ups and downs of his everyday life until he meets Sarah (Eva Lea), a young woman who dares to break the routine. A heartfelt comedy drama by writer-director Paul G Raymond, Stormin' Norman is a moving snapshot of an unlikely friendship between a grieving man and an aspiring musician.

We're very proud to have Stormin' Norman screened at the UK's biggest independent film competition and hope you can join us and say hello!

You can find a map to the event here and a full schedule for the entire festival (running 28 August - 15 September) can be viewed here. You can find out more information on this huge event by visiting the Portobello Film Festival website.

Don't forget you can go behind-the-scenes on the film's blog and also watch the trailer below!