LIFE IN A SKETCHBOOK - COMING SOON! 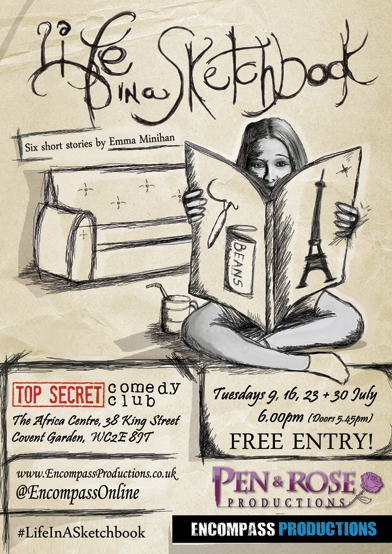 Within the confines of our modern society, sketches of seemingly normal lives play out. But not all goes to plan. The Dreamer dreams, the sofa stirs and the sandwich remains uneaten.

Premiering in London at the Top Secret Comedy Club on July 9th, acclaimed theatre and production company Encompass in association with Pen & Rose presents Life in a Sketchbook. Written by emerging playwright Emma Minihan, the full Life in a Sketchbook is a hopeful prod at the everyday, a casual shaken fist at the accepted norm, and a truth: that it IS possible to watch too much television.

It began with a sketchbook and a hopeful little pencil, thrown together with the inexplicable optimism that the pencil was destined for great things. Many stick men later, the pencil was swapped for a keyboard and life took shape and colour. Life in a Sketchbook is a series of six intertwined sketches that mirror our everyday lives – the people we meet, the situations we find ourselves in and the hopes and desires that define and restrict us. Encompass Productions in association with Pen & Rose invite you to have a flick through these six short plays that take humorous and poignant glances at life. Watch a whole host of curious characters through a pair of their somewhat askew glasses. Will you see yourself within the sketchbook?

Previous acclaim for Life in a Sketchbook:


‘A young, talented writer with a strong sense of humour and wit’


‘By far my personal favorite. A vibrant energy…hilarious.”
– What’s Peen Seen? on ‘The Sofa’