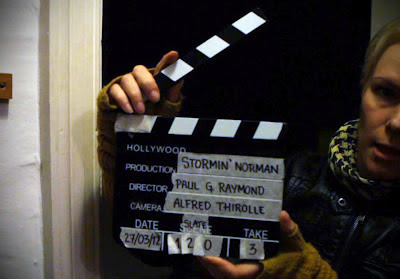 Tuesday 27th of March 2012 - the fifth and final day of our film shoot Stormin’ Norman. This was the D-day. The sun was shining upon us all as we found ourselves at the Blue Brick Café in East Dulwich for the last time (sob!). While we were waiting for our director Paul to make his appearance, runner Anthony kick-started the day with some well-needed cups of coffee and tea. Boom operator Pan even had time to fix his “seen-better-days” trainers with some gaffer tape!

We knew it was going to be a long and challenging day, yet filming commenced in good spirits. Bright-eyed and bushy-tailed, we all got to work to get the final scenes done. From time to time, curious pedestrians stumbled on our set to see the cast and crew immersed in the wonderful world of filmmaking. Demanding as our schedule was, we fuelled ourselves in between takes with the now famous banana fritters (which received a standing ovation – thanks Jon’s mom!) and delicious vegetable curry courtesy the Blue Brick Café. Time flies when you’re having fun, and today was not going to be any different. Before we knew it, the sun was disappearing behind the buildings and it started to dawn on us how much work there was still left to do. Like true soldiers of art, we pushed on to see the job done –and without a whisper of complaint from anyone.  As the darkness crept in, we finally managed to get all the shots in the café done.

As we were already running behind schedule, we quickly made our way to our second and final location in Streatham. While our transport coordinator Josh gave his sleep-deprived eyes a well-deserved break in the car, the rest of the crew ignored all the signs of tiredness and kept going. The estimated wrap-up time had been 8pm – it was now past 9pm. This was a rare occurrence – the production had been run efficiently so far, and we even managed to cut a day of filming…but if there was any day for us to be behind it had to be the last!  In spite of exhaustion, laughter and jokes were still very much part of the atmosphere on set.  To boost our morale, producer Jon pulled out all the stops to fill our hungry bellies once again with some delicious creations.

As our film shoot drew to a close, I suddenly realised that after today we would all go our separate ways again. For a brief time we had all come together to create something beautiful. We had come from all walks of life, and now we would all move on to seek new adventures. The legacy of our brief encounter is the film Stormin’ Norman. And like any other film shoot, so had this one been a unique experience for us all. We had nearly two weeks of blood, sweat, laughter (no tears, sorry!) and exquisite culinary exploration together. And 120 slates later we finally heard Paul the director say the magic words: “that’s a wrap, guys!”