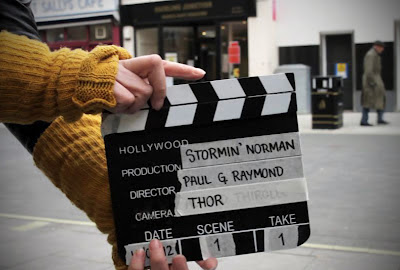 What. A. Day. And a great one at that! The first day of a film shoot can always be nerve-wracking, and on a project like this there were many reasons to be scared. For the Stormin' Norman film crew it was the first time they had ever worked together on actual filming - some of them actually met for the first time today! For those who have been working with Encompass Productions for nearly two years, it was the realisation of not only a new project, but the first ever Encompass production on film. And without going into too many details, the journey of this project has certainly given us all new challenges and we've learnt immensely from it.

The call was 07.30am at East Ham, a town in the London Borough of Newham. This would serve as one of the places where Norman (Christopher O'Shaughnessy) - a grieving homeless man with a boundless sense of optimism - will reside in our story. Written and directed by Paul G Raymond, the short film is a comedy drama centred on an unlikely friendship between a grieving man and an aspiring musician. Today Thor Eliasson was our Director of Photography, taking the reigns from Alfred until he returns for our shoot on Monday.

Without spoiling too much, today was mostly shooting Norman's "routine".  As this was on location, one of the earlier challenges was making sure the public would act natural - even with various signage and runners ushering the public! Despite these early difficulties one thing was clear: the good folk of East London were very interested in the film - once we had heard "he looks homeless" from a few people we knew we were doing something right! We'd get asked a lot of questions, and due to the content of the film many an interesting conversation was struck up with various members of the crew. We were told about the local (real) homeless man, who lives nearby. Lo and behold he actually passed by and spoke to us - Mr. Ackbar told us about London Street Rescue, an organisation that helps rough sleepers off the streets and into accommodation. He also told us about the street where he has slept for quite some time, and said that if we needed anything to come by and he'd be happy to help. The kindness of this man was truly humbling - our film is trying to portray homelessness realistically, and a big part of that is to show Norman as a person that happens to be homeless, rather than simply a "homeless person". Mr. Ackbar clearly was a real-life example of this.
Another strange co-incidence was that there was a Shelter street team today talking to locals about what they can do to help the homeless. We even had a kind lady try to offer Christopher some money during a take, not realising we were filming - she had tears in her eyes and he had to comfort her afterward. In the afternoon we passed by Mr. Ackbar again - rooting through a bin to find any thing he could salvage, eerily similar to a scene we had just shot. The line between reality and fiction became blurred as art was imitating life and at times it seemed life was imitating art.

We actually ran ahead of schedule and managed to shoot some extra footage - no doubt thanks to the work of our excellent film crew, Christopher's performance as Norman, the wonderful public of East Ham and the brilliantly tasty catering provided by Theresa (also costume designer) and Perlita - Encompass patrons also known as my mother and sister.

We'll be updating the Encompass blog very regularly over the next couple of weeks of filming. Don't forget you can join us on Facebook, and we'll be live tweeting (@EncompassOnline) each day of the shoot!