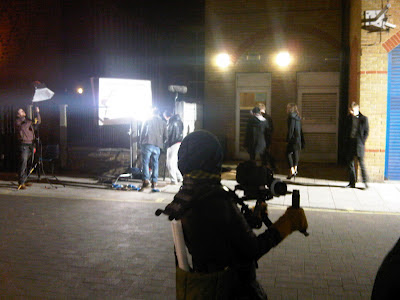 Ladies, gentlemen, boy and girls, children of all ages, Encompass Productions is proud to present you day two on location of the Stormin’ Norman shoot. My name is Anthony Anthimou; I am one of the runners on set to assist with the coming together of this short feature production. This was my first project with the production company and I was looking forward to our new venture. By reading this you will gain insight into my world and views of the day that we had in store for us…..so here we go!

The date, Monday 19th March, the time, approximately 18:00, the crew is set the cast is ready for the second day of filming. The good thing about a second day shoot is that all the cast and crew know each other, so all the getting to know you period is over and we could all get ready to rock and roll. 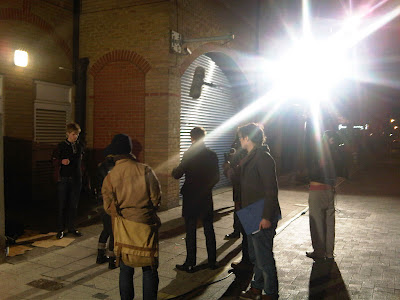 This was also our first night adventure when it came to capturing the essence of Norman, this required more lighting, warmer clothing and lots of hot teas. We were using the same location as we did on the first day of shooting, Norman’s home as I like to call it. Being that we had to film at night we used a lot more equipment and had to be careful about the security of the cast, crew and equipment. As we set up for filming we had a lot of pedestrians interested in what we were shooting; when they see big lights and cameras, they are like moths to a flame. Most of which actually thought Norman (played by Christopher O’Shaughnessy) was a real homeless man and that we were shooting a documentary. One gentleman in particular was so convinced, he came up to Norman, interrupted the shoot to offer to buy him food. Even after ten minutes, the gentleman would not concede that we were filming, needed to record dialogue and thus required silence. So Jonathan (the producer) and I ushered the gentleman to the side (and out of shot), to which he explained that he was sympathetic to Norman’s predicament because he used to be homeless. The guy was pretty cool, he talked about his life and where he wants to go in the world and we wished him the best and returned to the end of the shoot.

On the whole the team was amazing, as a runner and a future film maker I learnt a lot and gained valuable experience and friends. We worked well as a unit, from the director Paul, to the actors to all the crew, it was a quality atmosphere and I look forward to more days of filming. On a side note, the catering was amazing, provided by Perlita and our costume designer Theresa (Jon’s mother and sister!). The food was lovely and the teas/ coffees were of the highest quality (only because I made most of them LOL). P.S the apple juice came in very handy, if you want to know why, well you’re just gonna have to wait to see the film.
Thank you for reading and maybe you will hear more from me, until then….peace, love and the Encompass way